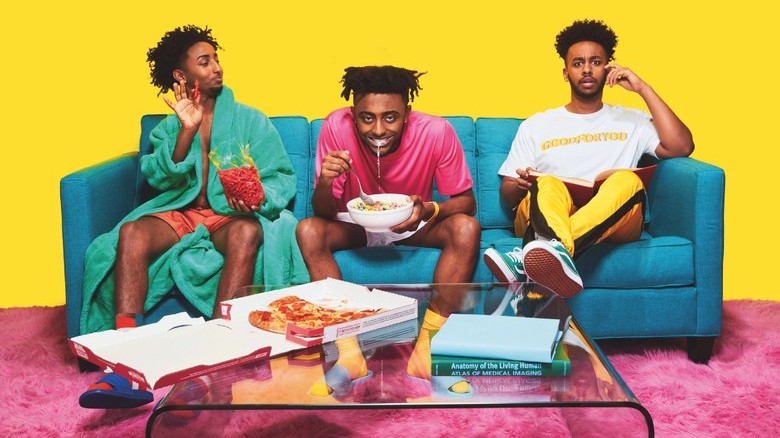 10 Ethiopian Rappers You Need to Know

Love it or hate it, rap has gone global. While the genre undoubtedly originated in NYC in the late ’70s, it soon spread not only to the West coast but further away than anyone could have ever imagined. And with rap music now an international phenomenon, many artists worldwide have started dabbling in the genre, rhyming in their own respective languages.

While acts from Europe, Latin America, and Asia are getting their fair share of recognition, most African rappers tend to fall under the radar. Even more so when they come from a country where its official language is neither French or English. That is the case of Ethiopia — the only African country never to be colonized, where its culture is still deep-rooted in its ancient traditions (for instance, the country follows its own calendar, and rang in the year 2011 this past September).

The Ethiopian rap scene is still relatively young, with most rappers rhyming in Amharic, the country’s vehicular language. However, Ethiopian artists are now starting to get local and international exposure, thanks to the overwhelming support of the young diaspora. And with the majority of the diaspora community residing in the United States (Washington D.C. has the largest number of Ethiopians living outside of Ethiopia, while Los Angeles has its own Little Ethiopia off of Fairfax Blvd), there’s also an ever-growing number of Ethiopian-American rappers out there.

Scroll down to peep the best Ethiopian rappers right now.

When Skat Nati surprise-dropped his new single “Sira” (which literally translates to “work”) accompanied by a video shot in an up-and-coming area of Ethiopia’s capital Addis Ababa, many were left wondering where he came from.

While Ethiopian rap had been a thing for a hot minute, this was the very first time we were introduced to a proper Amharic trap tune incorporating subtle, traditional melodies. Unsurprisingly, the song soon became an instant hit both in Ethiopia and among the diaspora worldwide, with the video gathering over 600,000 YouTube views in just a few months.

While “Sira” undoubtedly put him on the map, Skat Nati isn’t new to the game. He’s been releasing music since 2015, including tracks such as “Ahadu” and “Zeraf.” But if his latest track is any indication of what’s coming next from the young rapper, it may be safe to say that Skat Nati has a bright future ahead.

Washington D.C. has the biggest concentration of Ethiopians living outside of Ethiopia, with the diaspora now an integral part of the local culture (just take a stroll down U Street and you’ll see). So it shouldn’t come as a surprise that many up-and-coming Ethiopian rappers hail from the area.

Coming out of uptown Washington D.C., Ras Nebyu is an Ethiopian-American rapper who’s gathered a following in his home base. Co-founder of the Washington Slizzard — a collective of D.C. rappers, producers, and overall creatives — Ras Nebyu first hit the scene in 2011, with his debut mixtape Kennedy Street Teachings, and has since grown bigger and better.

In 2014, Nebyu released Ras Griffin III, on which he swiftly switched from rapping to singing, and even went on to perform overseas, opening up for Wizkid in Ivory Coast’s capital Abidjan. More recently, Nebyu linked up with PG County raptress Rico Nasty on “Thirsty Packman,” a track which anticipates Nebyu’s first studio album Uptown Lion Walkin’, to be released on November 1.

Alright, Aminé may not need a proper introduction. The Portland, Oregon rapper rose to fame after his single “Caroline” hit the charts in 2016, and he’s been killing it ever since. But did you know he was Ethiopian?

Yup. Aminé’s full name is Adam Aminé Daniel, and his parents immigrated from Ethiopia and Eritrea into the United States in the early ’90s. In fact, you could say that Aminé is pretty proud of his Ethiopian roots, with songs like “Baba” (meaning “daddy” in both Amharic and Tigrinya) on which he can be heard spitting a few verses in Amharic.

Last August, Aminé dropped ONEPOINTFIVE, and visuals for the standout track “Reel It In” soon followed. Once the video dropped, which sees Aminé at a car wash surrounded by strippers, his mother sent him the most hilarious text ever, which included the sentence Besma’am wilde menfes kidus (for the non-Ethiopians, this literally translates to “In the name of the Father, the Son, and the Holy Spirit). So yes, Aminé is American, but he won’t hesitate to remind us of his Ethiopian roots.

Siimba Liives Long was born in New York, grew up in Addis Ababa, and then returned to Brooklyn. In 2015, Siimba dropped visuals for his single “Cocaine Bimbie,” returning to Ethiopia to shoot the visuals, in which he can be seen frolicking with wild lions and literally playing with fire.

As you can image, Siimba is not one to shy away from thought-provoking and insane visuals. Just a couple of months ago, he released the video for “Hooked,” in which he’s hanging from hooks piercing through his skin. An introspective song about all of his vices, “Hooked” also touches on his Ethiopian background: “My momma worked hard as an immigrant / just so I could be raised as a citizen.”

Just recently, Siimba dropped his latest video for “Bad for the Soul” featuring Kamau. Stay tuned for more coming out from the rapper, as he’s currently releasing music on a weekly basis.

Fershgenet Melaku, aka Lola Monroe, was born in Addis Ababa and raised in Washington D.C.’s Garfield Terrace. Does she look familiar? That might be because she first was a video model under the moniker of Angel Lola Luv (back when being a “video vixen” was an actual career), and starred in many videos we all know and love, such as Kanye West’s “Good Life” featuring T-Pain.

Determined to be more than a video model, Lola gradually transitioned into music and released her first mixtape in 2009, Boss Bitch’s World. Other mixtapes soon followed and, in 2011, she was signed to Wiz Khalifa’s label and dubbed the ‘First Lady’ of Taylor Gang.

While at Taylor Gang, Lola released Lipstick and Pistols, and later dropped her debut single “B.B. (Boss Bitch)” featuring fellow Taylor Gang artists Chevy Woods and Juicy J. In 2013, however, she announced that she wasn’t part of Wiz’s label anymore. Today, five years and a baby later, she’s working on coming back with her debut album, so stay tuned.

Along with the DMV and California, Texas also has a pretty sizeable Ethiopian community, with Dallas having the biggest concentration. And Dallas is where Samsonyte, a young Ethiopian-American artist, calls home.

In 2017, the now 22-year-old rapper self-released his debut album The Muse, which accumulated tons of streams across all platforms. Samsonyte’s 12-track debut album contained “Lucy,” an uber-smooth track sampling Dr. Dre’s “Xxplosive” and Erykah Badu’s “Bag Lady” (which actually sampled “Bumpy’s Lament” by Soul Mann & the Brothers, but I digress…).

Committed to turning music into his profession, Samsonyte has recently quit his day job to pursue music full-time and focus on his sophomore album. Listing André 3000, Pharrell Williams, and J. Cole as his main influences, Samsonyte is here to share his jazzy neo-soul and retro vibes with the world.

Like many up-and-coming Ethiopian-American artists, OneTakeDrew is a rapper out of the DMV area. Based in Alexandria, VA, Drew began taking rap seriously a few years back, following his remix of Wale’s “Ambition.” Since then, many other remixes followed and Drew ended up opening for Erykah Badu, Ab-Soul, and Stalley. In 2016, he released his first tape Ventilation, which landed him on Joe Budden’s podcast.

Born from an Ethiopian mother and an African-American father, Drew’s mother left Ethiopia at the age of 3, due to the country’s then-communist regime. While he’s never been to Ethiopia, Drew plans to take a trip there sometime soon.

“Doro wot is the shit,” admits Drew. “It’s probably one of my favorite dishes on Earth. Above all else though, I love the sense of camaraderie I feel in the Ethiopian community from complete strangers. It gives me a sense of pride, so when I hit a milestone or achieve something it’s not just for me. It’s for the entire community.”

Born Tewodros Assefa, Teddy Yo is one of Ethiopia’s most known acts. Teddy was born in Shiro Meda, a neighborhood of Addis Ababa, and later moved to Ayer Tena. The first hip-hop song he ever listened to was a track from LL Cool J and fell in love with the genre ever since. Later on, he felt that his generation needed a more modern sonic outlet to promote their culture, and hip-hop was the perfect medium.

Teddy initial rose to fame was in 2007 thanks to “Gurageton,” a festive uptempo track released to celebrate the new Millennium (remember, the Ethiopian calendar is seven years behind). This led him to get lots of bookings not only in Ethiopia, but also across the U.S., Australia, and the UK, where a lot of the Ethiopian diaspora resides.

In a music scene where artists tend to dabble in all genres, from traditional Ethiopian music and reggae to hip-hop and rock, Teddy is determined to stick to the script and help establish Ethiopian hip-hop as a long-standing genre.

If Ethiopia had a “rap star,” then it would be Lij Michael. The young rapper, previously known as Faf, is what many would describe as the most popular Ethiopian rapper to date. Lij Michael, real name Michael Taye, first hit the scene in 2007 with his debut single “Arada L’arada,” which quickly garnered over 300,000 YouTube views in its first few months.

Other catchy rap tunes soon followed, and Lij Michael soon became popular both in Ethiopia and abroad. Fusing Ethiopian sounds with hip-hop, Lij soon became the main reference for the latest generation of local musicians. What’s more, Lij is also known as being one of the originators of the Ethiopian rap movement, helping put the genre onto the country’s music scene.

Admittedly, the country’s music scene has been predominantly traditional with pop and reggae artists on the big stage, for the most part. Not anymore — Lij Michael and others have been able to break through and show the older generation they mean business.

TBH, Hahu Beatz’s sound (and visuals) will be appreciated by those already familiar with the culture. His newest single “Zomawa” is a hit — with 6 million views and counting — however, it may not be for everyone. But once you get past the creepy clowns and unfamiliar sounds, you’ll find that it’s pretty damn catchy.

Coming from Mekele, Tigray, Hahu Beatz has been part of the Ethiopian rap scene for nearly a decade. Before rapping, Hahu actually went to college (like pretty much every Ethiopian kid is expected to do) and graduated with a Bachelor’s degree in Business Management from Hawassa University.

Still, he decided to focus on music and originally began rapping in English. However, he soon discovered that young Ethiopians would rather listen to English-speaking rap from the U.S., and switched to Amharic instead. Before breaking through with his hit “Zomawa,” Hahu released other note-worthy singles such as “Yibelu” and “Demkalech Wstea.”