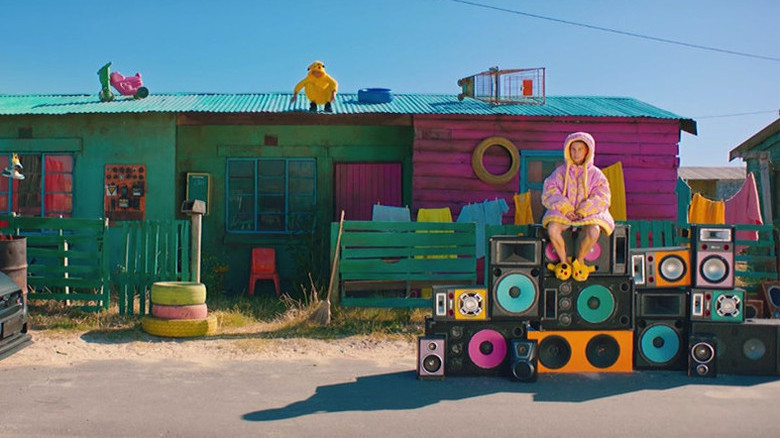 This is it, this is it! After a long delay on the name, the release date, the form, the number of tracks... Die Antwoord finally unveils the rather disturbing and more xhosa than cosy interior of his latest album, House of Zef!

And in this great house of zef and South African raprave, we enter it like in a horror movie mansion, in this creepy atmosphere that Die Antwoord likes to distil, in this darkness in which Die Antwoord likes to evolve! And then, as the black synthesizers decant, we get caught by the power of the beats that spawn as much with techno as the very fashionable gqom and the virulence of the words, we get caught by the swirl of the bass, and the clatter of the mouths and the electronics, and then... and then... we get f***** by the vocal evanescence of Yolandi, and the insolence of Ninja!

After having wandered for a while in the large vestibule of this House of Zef, we see the gleaming lambo parked in the garage, the maddened gods dancing in the living room, and the rooms in which we don't sleep, the bathrooms more made for the bang than the gang. But above all, we also realize that it is also a f****** house of guests and therefore that Die Antwoord's bet to put forward the new South African scene (and even new scene, in short) is held! Thus, we can see names like JouMaSePoes and Gqwa! blooming at the corners of the tracklist, like the very American Panther Modern, or Moonchild Sanelly who shows us once again that behind the blue bush and the huge buttocks she likes to show off and shake on the networks, there's a very pleasant flow, also those of the photographer Roger Ballen, Skelm, the smiling Smiley, or Bobojan.

At the end of this real estate and especially musical visit, we find an album faithful to the image and the sound of the band, which balances between obscure mud and moments of overexcited madness... and if we believe the band's words, it's maybe even their last album, the final point of a weird and crazy adventure that will have conquered the world.